How Long is a
Semester in College? 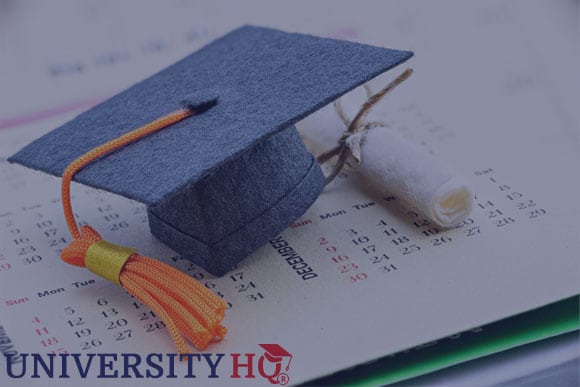 Top Resources to Help You Prepare for College Application Deadlines

College life is full of new and exciting experiences. Students are suddenly offered far greater freedom, loads of new people to meet, and courses that offer new and challenging ideas. One primary challenge in college is time management. Since schools may divide students' time according to a quarter or semester system, this seemingly mundane aspect of college life should be carefully considered. After all, one's life activities will be determined in no small part by how their classes are structured.

A year spent on the semester system will often start earlier in the year, but then it will end earlier as well, though with a shorter winter break relative to quarter systems. This is typically better for students who wish to pursue work or other educational opportunities over the summer. The semester system also tends to align with the systems most of us experience in high school, thus providing an easier transition for first-year students.

How Many Weeks in a School Year?

A school year can come in many different forms. College students may have the option of a school year that conforms to a quarter system or a semester system. The quarter system divides the calendar year into four parts, yet most students take courses during only three quarters, taking off the summer quarter. Meanwhile, semester students have a year divided into two parts. However, semester schools also offer courses during the summer; these are often more intense courses that manage to convey a full semester of learning in about five weeks.

A semester school year typically consists of 30 weeks total, with 15 weeks per semester, though some schools go for as long as 17 weeks per semester. Generally speaking, a full load of courses in a semester system is four courses, which may meet once, twice, or three times per week, though exceptions exist, especially for laboratory science classes.

Schools on the quarter system generally allot 12 weeks per term. Students in these systems take three courses per term which usually meet five days per week, though some courses may have longer sessions and thus meet fewer times per week. Thus, if a student attends courses for three quarters per year they spend around 36 weeks of a 52-week year in class. Meanwhile, semester students spend 30-34 weeks in class.

Opinions vary as to which method is preferable for long-term retention and overall academic value. In fact, some studies have shown that semesters that are subdivided into four parts are more effective. These systems have students focus on one course at a time rather than having to balance work for four classes at once.

How Many Weeks in a College Semester?

A college semester is generally between 15 and 17 weeks long. Schools divide their year into two semesters, fall and spring, where students take four courses per term. During the fall term, students have several days off for Thanksgiving and some schools feature a Fall Break, which is an added week off, often in October. Schools on the semester system also offer courses during the summer, so some refer to these institutions as trimester schools. Summer courses are generally offered over a shorter amount of time and are structured with up to five class sessions per week. Thus, summer sessions typically restrict students to two courses per summer term.

Each course is allotted a set amount of credit hours. This varies from school to school. Some schools give three credits per course, but the most competitive schools give five credits per course. The number of credits relates to the workload students bear. Where a four-credit course may ask students to read one book per week, a five-credit course may cover multiple books per week.

Schools that operate on the quarter system often allot three credit hours to each course. Thus, a full load in a quarter is nine hours, while a full load for a semester is between 12 and 16 hours, depending on the school.

How Many Semesters to Graduate College?

To graduate with a four-year bachelor’s degree within the prescribed four-year window from a college or university that uses the semester system, students should take a full load of courses in each semester. Since there are two semesters per year, students will take courses for eight total semesters prior to graduation. Since some students need to take a part-time load for some semesters, they may need to extend their college career into nine or more semesters.

Those who go on and complete their bachelor’s degree and then return for a master’s degree will find that they are back to a two-year system. Though law students will return for three years, most other graduate degrees take two years, or four full-time semesters, to complete their classes.

There are other factors that can prolong one's college career. Some students find that they need to drop courses along the way or that outside concerns prohibit a full load. It is considered unwise to take less than a full schedule of courses during any semester. The added cost alone can cause long-term woes, especially for those who rely on loans to subsidize their education. The added time can also mean less opportunity to build experience in the working world.

Some students are able to make up for a dropped course during a summer term, however. While this is a workable solution, that course can inhibit one's ability to earn money in a summer job. Summer courses also add to the total cost of college.

Semester and quarter systems are used throughout the United States. While the semester system seems to be gaining more converts than the quarter system, each has its advantages.

Adherents to the semester system will point out that their students have more time to devote to their courses and greater flexibility in their schedules. Semesters are longer than quarters, so students have more time to get deeper into the subject matter. They may even have time for field trips which can enhance learning in a history class, for example. Courses in a semester system structure frequently are divided into Monday, Wednesday, Friday courses and Tuesday – Thursday. There are also M-W courses and courses that meet once a week for an extended session. Thus, semester students may load all of their class sessions into either the M-W-F or T-Th structure and then make time for a part-time job or other activity.

Meanwhile, quarter system students typically have all of their classes scheduled five days per week. This means that around three hours per day are relegated to class sessions; more if they are taking a course with a laboratory attached. This can pinch students' ability to work outside of school. It also increases the chances that they will have multiple assignments due on the same day.

As for which system is preferable from a purely academic point of view, that is an issue that scholars are still debating. Some studies have found that intense studies yield better long-term results. The best overall blends the quarter and semester approaches, the block plan. In a block plan, the year is divided into semesters, but each semester is then divided into four blocks. Thus, students spend 3.5 weeks per block in a single class. Students are immersed in a single subject or class for that entire time. Once that course is complete, these schools offer a short break, often 4.5 days, before they start back up with the next class on the agenda.