What Are ROTC Programs and How They Work? 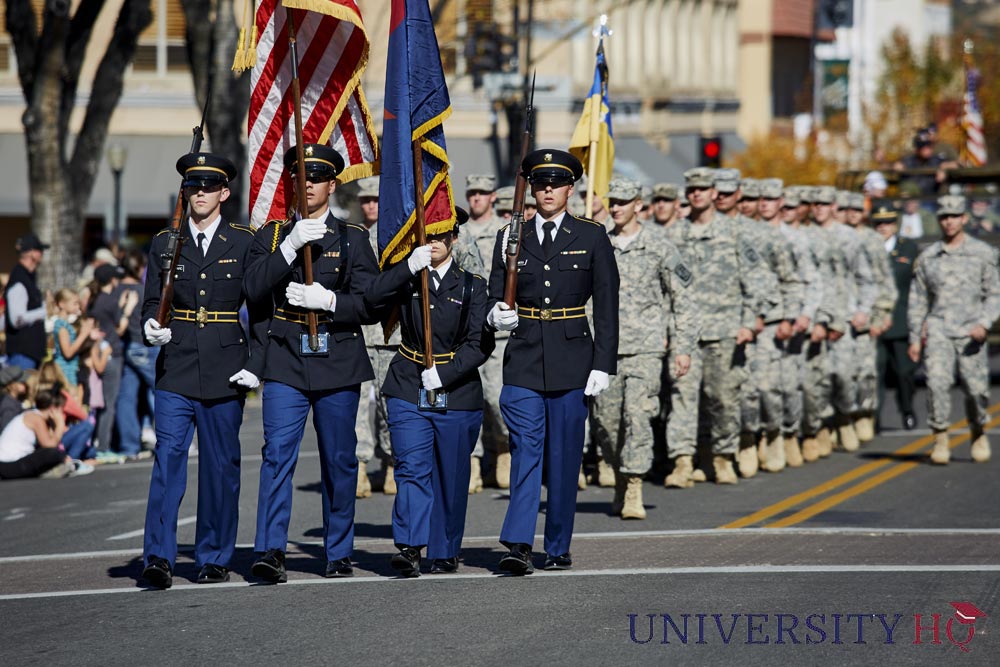 ROTC stands for Reserve Officer Training Corps, and this program is offered in 1,700 universities and colleges throughout the US. ROTC helps college students, male and female, to prepare to enter a military career as officers in one of the three branches in which it is offered: Army, Air Force, and the Navy/Marines. The Coast Guard doesn’t have an ROTC program for students interested in a career in this particular military branch.

Students in each branch of the ROTC benefit from scholarships, monthly stipends and a career that is guaranteed after graduation. Students in ROTC also derive benefits from learning how to develop valued leadership skills, discipline and good physical fitness.

Resources for Before and After College

What is Cyber Security?

What is the ROTC?

The simplest answer is that ROTC is leadership development. In each military branch of the ROTC, universities and colleges treat the program as an elective curriculum that students take on top of their required coursework.

In ROTC, you’ll have experiences that you will fall back on throughout your life. You’ll learn how to develop time management and mental discipline skills that will serve you in your military or civilian career, should you leave the military. ROTC consistently looks for students who want to excel, as well as students who are seeking a career in the military. Enrolling in ROTC means you will take classes in military drill; you’ll participate in “live” exercises that help you to develop as a person.

ROTC is also a source of scholarships. If you maintain at least a 2.0 GPA, you may qualify for a scholarship. If you enroll into the Army ROTC program and you win a scholarship, you will be required to complete a specified time of service in the Army. The same condition applies to students entering the advanced course.

Do I Need to Have Participated in JROTC?

No. JROTC training aids you, but it is not mandatory for enrollment in ROTC. If you stay in JROTC for the full four years of high school, you still will not be required to commit to ROTC or military school upon graduation from high school.

Benefits of JROTC include being eligible for certain school-specific scholarships if you are in JROTC as early as the 9th grade. If you are awarded one of these scholarships, it will pay for your education at one of 260 colleges or universities. You may also be more likely to win an outside scholarship because of your leadership training.

To be eligible to enter and enroll in ROTC, you have to meet several requirements.

Entering as a Cadet

Initial entry training is for those cadets who want to complete their Army ROTC training in one year instead of two. You accomplish this by completing a 28-day training program at Fort Knox, Kentucky. This program is challenging, but when you complete cadet initial entry training (CIET), you’ll come back to school ready to begin the advanced course.

If you plan to complete your basic elective course in two years, speak with the Army ROTC Enrollment Officer on campus. You’ll also learn about scholarships and incentives. Junior college students and graduate students are able to enroll in ROTC as well.

Entering as an Enlisted Soldier

If you have prior service as an enlisted soldier and you are thinking of becoming an officer, the ROTC program is one way of meeting your goal. The process of enrollment after prior service is the same as for students who want to become cadets in the basic elective course—speak to the Enrollment Officer on campus.

As with beginning cadets, you may be eligible for one of several ROTC scholarships. As a prior-service student, you should keep your age and the age limitations of ROTC in mind as you consider your options.

Entering While Part of the National Guard or Reserve

As a member of the Army National Guard or US Army Reserve, you are able to enroll in Army ROTC under the Simultaneous Membership Program or SMP. By enrolling in the ROTC SMP, you’ll be able to attend additional training events and get more experience. As an ROTC cadet, you will be able to serve as an officer trainee in your Reserve or National Guard unit at the same time that you are attending your regular college classes. You’ll be taking on responsibilities and duties of a commissioned officer, leading enlisted soldiers during weekend drills. In addition, you’ll be able to continue earning your normal Guard or Reserve pay and benefits at the same time you receive ROTC allowances.

By enrolling in the Air Force ROTC program, you are positioning yourself to become a leader, either in the military or as a civilian. You’ll be able to take specialized classes that assist you in developing your leadership skills. These classes include leadership laboratories, where you learn about the various functions of military leadership.

When you graduate from college and go through your commissioning ceremony, you’ll be walking straight into a managerial role in the US Air Force. While you are in ROTC, you’ll learn what your career path could be before graduation. Your skills prepare you for a leadership role anywhere.

Army ROTC cadets learn about leadership as they prepare to lead enlisted and non-commissioned officers through dangerous and challenging situations. As you move through your courses, keep in mind that famous alumni passed through ROTC before you: Colin Powell, Samuel Alito, and George S. Marshall. Army ROTC trains and commissions about 60% of the second lieutenants who move on into active Reserve and National Guard duty.

Each of your cadet programs (basic and advanced) give you the tools you need to find and develop your leadership abilities. ROTC also teaches you how to use self-discipline skills; working in training experiences, you’ll use all of these skills.

Navy ROTC trains cadets who choose whether to go into the US Navy or the US Marines. This program runs for several years and is designed to operate alongside a cadet’s regular university degree program. As cadets are taking classes required for their degrees, they are also attending Naval Science classes, participating in physical training, drills, and other ROTC activities.

Leadership training is a major part of the military training a Navy ROTC student receives. Cadets also go through classes that teach them the ethics and ideals that a military officer is expected to hold.

ROTC cadets who receive ROTC scholarships are now under an obligation to complete several academic requirements.

Cadets receive paychecks from their scholarships once monthly. Freshmen receive $300; Sophomores, $350; Juniors, $450; Seniors, $500. Scholarships are awarded once per year. Students must apply before November 15, and selections are made on a rolling basis until May 15. Four-year scholarships must be applied for between March 1 and November 1.

AFROTC cadets are required to maintain good physical condition. They must also adhere to weight and fitness standards that have been set forth by the US Air Force. This helps them to maintain a good degree of professionalism and appearance while in uniform.

AFROTC cadets are also required to pass a Department of Defense (DoD) Medical Exam Review Board medical examination (DoDMERB). NROTC students will be entering a physically demanding profession. They must be physically prepared and be in good health. Every applicant and nurse applicant is expected to complete a Navy ROTC Applicant Fitness Assessment, then provide this to their recruiter. This is a mandatory part of their application to ROTC.

As with AFROTC, Navy ROTC applicants must take a DoDMERB exam and forward this to their recruiter.

Upon being commissioned into any of the military services under which you entered ROTC, you will be obligated to serve for a defined amount of time.

Army ROTC students who are enrolled in the ROTC Advanced Course or who receive an Army ROTC scholarship must agree that they will complete eight years of service in the Army. This can be split up by spending four years on active duty (scholarship winners) or three years (cadets who took the advanced course). Some cadets may opt to serve part-time in the US Army Reserve or Army National Guard at the same time they are working in a civilian career.

Navy ROTC cadets must maintain their active US Coast Guard Merchant Mariner Credential (MMC) for unlimited horsepower (engine) or unlimited tonnage (deck). They must serve for at least six years. Every Strategic Sealift Readiness Group (SSRG) member is required to finish 12 days of ADT (Active Duty for Training) each fiscal year after graduation. They must also undergo a Physical Health Assessment annually.

Where are These Programs?

During the Civil War, Congress passed a bill that helped to provide free land for non-military colleges that agreed to give military instruction to students. in 1916, this system, known as the “land-grant” system, was transformed into today’s ROTC.

More than 1,700 universities and colleges maintain an ROTC program on their campuses. ROTC programs were first initiated in 1916 when President Woodrow Wilson signed the National Defense Act of 1916 authorizing the program. After the end of World War Two, Congress passed the ROTC Vitalization Act. This authorized ROTC units to be formed on college and university campuses.

Three hundred host campuses have an ROTC program that follows and instructs in at least one of the military services (Army, Air Force, or Navy/Marines).

Is ROTC Right for You?

If you are considering joining ROTC, you need to know if this is the right program for you. If you don’t want to be obligated to a service commitment, you’ll enroll in the basic course. You’ll take ROTC classes for two years. You’ll also gain skills that will benefit you throughout your life.

While you will be obligated to take part in some activities, it shouldn’t get in the way of your other classes. Students in ROTC benefit by earning a higher GPA and developing a high level of athletic and academic success.

You will be required to have a well-groomed haircut. Men should wear their hair off their ears and shoulders. They are also expected to be clean-shaven. During training and your ROTC classes, you are required to wear a uniform; your classes will teach you how to wear it properly.

If you have decided that you want to join the military as a commissioned officer, then ROTC is an excellent choice. You’ll gain basic and advanced knowledge about the military and becoming an officer.

Once you have decided to commit to spending time in the military, an ROTC scholarship can help you defray the costs of tuition, fees, and textbooks. A monthly stipend helps you to cover personal expenses.

Beyond the financial help that scholarships offer, you will benefit by knowing you’re going to move straight into a position in the service of your choice (Army, Air Force, Navy, or Marines).