South Carolina College Guide – What You Need to Know

South Carolina has a multitude of colleges and universities for nearly any preference in a field of study. With the help of the state’s diversification and inclusion initiatives, more and more young people want to live in South Carolina. You will find higher education institutes near the sea, and you will find colleges and universities with some of the most stunning historical buildings in the US.

The state is filled with a healthy balance of public and private accredited colleges and universities with online programs. Some of the most reputable and popular public four-year schools include Clemson University, University of South Carolina, College of Charleston, Winthrop University, and Lander University. If you prefer private education, consider Coker College, Newberry College, Converse College, and Furman University. For those of you looking to skyrocket your military reputation, The Citadel is one of the premier military colleges in the country. 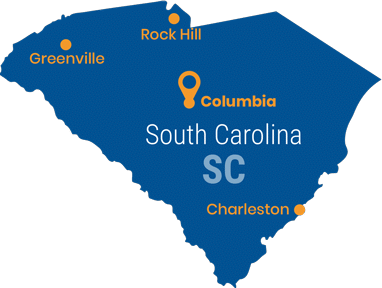 What are the most popular bachelor's degrees offered in South Carolina?

South Carolina is on trend with most states in regard to business, marketing, and health professions being highly popular bachelor’s degree programs. These three areas seem to remain in demand nationwide and will continue to do so for years to come. The strategic location of South Carolina has made it an ideal location to be used as a transportation hub. This has created a demand for transportation, logistics, supply chain, and procurement majors in the state. And the automotive and aeronautics industries continue to prosper. Unlike most other states, South Carolina has an extraordinary biotechnology industry that is booming.

You will almost always make more money with a degree than without one. In fact, the higher your degrees of completion the more money you will make. It is possible to make decent wages with a high school diploma or an associate’s degree; however, you will catapult your earning potential with a bachelor’s or a master’s degree. These degrees are relatively easy to obtain today with the help of accredited online programs from reputable colleges and universities like those in South Carolina. Keep working or looking after your kids while you complete your degree one class at a time. And remember that many employers will provide tuition reimbursement for those who work to improve their skill set and knowledge base while in their employee. 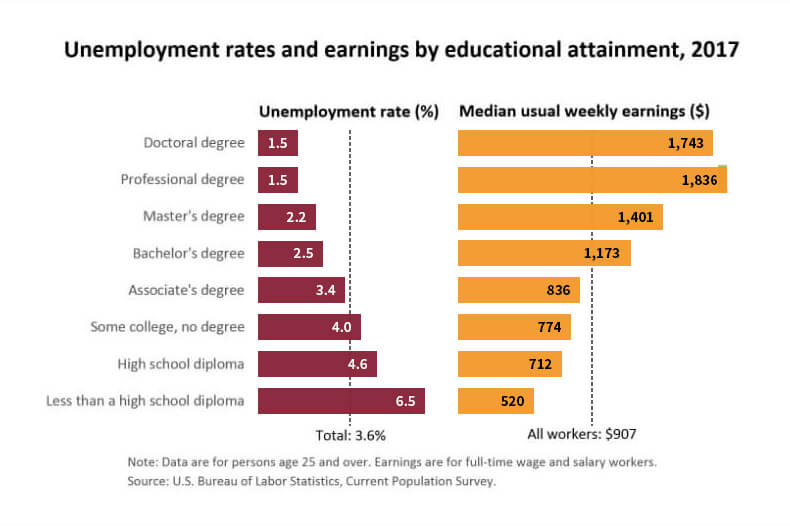 Most Popular Degrees and Top Careers in South Carolina

A surge in new transplant residents has been occurring in South Carolina for several years. This population increase has made the state one of the fastest growing states in the US, with an excess of 5 million people now legal residents. The state is experiencing such shifts due to an influx in retirees moving to the Palmetto State with the appeal of a lower cost of living and significantly nicer weather than many places further north. Younger people are also moving to the state as job creation continues to occur at relatively high rates.

The largest employment positions vary greatly, such as administrative support, sales, transportation, production, healthcare, education, and management and the growing industries are having a tremendous impact on the region. The unemployment rate was recently a mere 3.3%, which is a bit less than the national average. As the state continues to diversify its employment opportunities the students will continue to shift their focus to meet these newly created jobs.

Many careers in bioscience involve research or technology. South Carolina is home to a number of industry-leading businesses and laboratories in this field. You can choose a support role or a more hands-on role in this industry.

Business careers in South Carolina exist in nearly every industry. You can work in healthcare, aeronautics, education, manufacturing, transportation, and more. Whether you wish to work in finance or in management, you will find a rewarding business career.

Health professional careers have a wide range, from taking blood to managing a hospital. This field is one of the most stable as it is consistently expected to have one of the highest growth rates of nearly all professions. You can always start as a nurse and work up to a specialized practitioner to increase your salary and advance your career.

Marketing continues to become increasingly complex with the introduction of digital marketing years ago. Companies have to stay on trend with the latest social media channels, create content, analyze marketing campaigns, and much more. A marketing professional can also work on events to help make them a success.

Careers in social sciences are always in demand no matter where one lives. The need for more mental health professionals continues to grow along with social workers in healthcare. You can find a niche within the social sciences and advance your career for decades if you so choose.

Want to See All the South Carolina Occupational Wage Averages

South Carolina is experiencing job growth where other states are lacking. For people with an associate’s degree or higher, you can expect to see growth in the following jobs till 2022:

The cost of your overall education is highly important to consider. If you take out $100,000 in financial aid and only make $25,000 a year, you may struggle to pay your bills for the rest of your life. It is important to think about potential careers and the cost of your education before you select a school. Most four-year public colleges and universities are highly affordable for those paying in-state tuition. If you are not a state resident, you will have to pay out-of-state tuition which is often significantly more. If you plan to attend a four-year private school, it will cost in-state residents roughly double in most cases if not more. Private schools typically have the same tuition costs for in-state and out-of-state residents.

Do not forget to include the cost of living and your book and class fees. These will all add up. It might be less expensive to live on campus in some towns or cities. In other cities, it will cost more to live on campus. These are all financial aspects to consider before you choose the right school for you, and remember that online courses can help you save money and provide you with greater flexibility in your life.

The vast majority of students in the US require at least some financial assistance regardless of the college or university. South Carolina is ranked number 14 in the US for the most financial aid awarded. Each student receives roughly $10,689 on average with a total of 194,600 students receiving federal aid each year and 63% percent of all applicants are approved for financial aid.

Helping You Maximize Your Education Earnings

https://www.cancerforcollege.org/applications.html
Amount: $5,000
Deadline: January 31
The Cancer for College Carolinas Scholarship is dedicated to applicants who have been diagnosed with cancer themselves. The applicants must also plan to attend an accredited degree program rather than a certificate program. You will have to be a full-time undergraduate student or a part-time graduate student to qualify. The recipient and their parent or guardian cannot earn more than $150,000 to be awarded this scholarship. You will be required to present financials, letters of recommendation, and your intent to attend a college or university in South Carolina or North Carolina.

https://fftcscholarships.communityforce.com/Funds/Search.aspx
Amount: $2,000
Deadline: March 1
The African American Network Carolina Chapter is managed by the Fund For the Carolinas. This is also a part of Duke Energy which is a major employer in South Carolina. Applicants must be interested in one of several specific degrees, such as accounting, business administration, computer science, engineering, finance, mathematics, or science. You must be a graduating high school senior from either North Carolina or South Carolina, and your GPA and need for financial assistance will be important factors. You must attend a college or university in North Carolina or South Carolina.

http://answerscholarship.org/
Amount: $2,000-$4,000
Deadline: March 1
The Anderson Nontraditional Scholarship for Women’s Education (ANSWER) is for women who are at least the age of 25 or older. Applicants must be raising children at home who are school-aged. ANSWER provides the scholarship and a network of women to offer advice and encouragement to other women who wish to continue their education. To be eligible, you must enter a two-year program for nursing or a CPCC health career. If you enroll in a four-year degree program, you will also qualify. Scholarships are based solely on donations from the ANSWER network, including individuals, businesses, houses of worship, and others.

https://www.yourfoundation.org/BobbiRossiScholarship
Amount: Varies
Deadline: March 17
The Bobbi Rossi Memorial Scholarship is part of the Central Carolina Community Foundation. Applicants must be working toward a nursing degree at the University of South Carolina and must be in the upper division of the program at the time of their application. They must also have at least a 3.0 GPA and be a full-time student the entire traditional school year. Applicants must demonstrate the ways in which they participate within the community and in campus life and prove their financial need to be considered.

https://fftcscholarships.communityforce.com/Funds/Search.aspx
Amount: $1,250
Deadline: March 1
The Carolinas-Virginia Retail Hardware Association is managed by the Foundation for the Carolinas. Eligible individuals must be the child of an employee of a business that is a member of the Carolinas-Virginia Retail Hardware Association and a resident of South Carolina, North Carolina, West Virginia or Virginia. Eleven scholarships in total will be awarded each year. Recipients will have at least a 2.5 GPA, and a parent or guardian must have been a full-time employee of a member business for at least two years.

Are You Ready to Take Your Education to The Next Level

Get started today on your path to advance your career!