How to Become an Early Childhood Administrator in Alabama

What is Early Childhood Administration?

The demand for educational administrators and teachers is higher than ever. So, whether you’re looking to start your career or switch over into the field, you can find here all you need to know about early childhood administration degrees in Alabama.

In general, the educational administration career field can encompass oversight and planning in schools or any educational settings for that matter, including daycare centers. Educational administrators are usually part of the top management of an academic system, such as the school’s head principal, vice-principal, college dean, admission/program director, superintendent, and more.

Early childhood education (ECE) is technically defined as the time frame of learning for children from birth to age eight. Most early childhood administrators (ECA) and educators who specialize in ECE will teach students in preschools and elementary or primary schools, though some can work beyond the classrooms, such as in federal- or state-funded programs and daycare centers, and possibly also with young children who have special needs.

Alabama has one of the highest quality education systems in the U.S., especially in regard to its early childhood programs. The state’s Department of Early Childhood Education has an increasing budget yearly, resulting in significant projects like First Class, which aims to promote long-term educational success and growth statewide.

Furthermore, Times Daily reported in 2016 that the year’s new school semester had increased to around 2,900 preschool students due to dedicated funding. In 2018 alone, nearly $100 million was invested into improving educational programs and teacher salaries in Alabama.

Additionally, all of this has resulted in scholarship opportunities for prospective educators to gain a more affordable access to a degree in ECE, such as with the T.E.A.C.H. Early Childhood ALABAMA and Alabama Pathways. Not to mention, new and improved state requirements have risen to those hoping to become licensed as an early childhood worker. 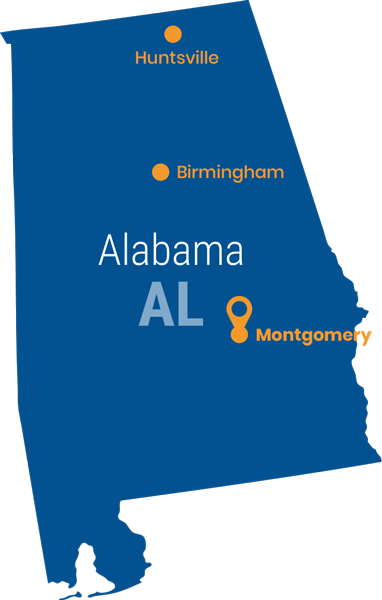 For prospective educators, a degree in ECE can lead to a variety of job opportunities to teach and design critical curriculum that enhances the development of young children. Here are the degree types available, along with how far each will let you get in the field.

With an associate-level degree in ECA, you can work several entry-level childcare positions, some of which are:

Suppose you enroll in the associate program as a full-time student. In that case, you can complete the degree within two-years’ time and obtain the necessary foundational knowledge to supervise, care for, and teach children ages 0 to around 10. This associate degree route also paves the way for many students to continue on toward a Baccalaureate degree in ECA, including the option to license through a PreK-3 provider.

In Alabama, most public schools require a minimum of a bachelor’s degree to qualify as a preschool teacher or administrator. As such, those with a bachelor’s in ECA are commonly found to work the following roles:

A bachelor-level education in early childhood teaching usually takes up to four years to complete and may further land you in state-funded children’s programs, private preschool settings, and primary or secondary schools. Most required coursework for such a bachelor program revolves around the theories behind teaching young children, dealing with instructional technology, and honing your knowledge of childhood psychology and development.

In combination with relevant work experiences, those with a master’s in ECA are more likely to qualify for the following advanced childcare positions:

Furthermore, these following childcare positions require both a bachelor’s and master’s in studies related to ECA:

A doctorate or Ph.D. in early childhood education is the most advanced education level to achieve in the ECE field. As such, it can help prepare graduates for opportunities both inside and outside the classroom.

With such high-level expertise in understanding children, most with an ECE doctorate go on to pursue jobs in educational research and serving in top management for educational programs. Some even can go into being a speech and language therapist, community development worker, children’s nurse, child psychotherapist, curriculum development, or legislation or policy making. However, a doctorate graduate can still work with young children in the classroom.

While a doctorate in ECE is undoubtedly not necessary to succeed as an early childhood administrator, it will likely make you stand out as a candidate for the management position and possibly create a higher salary range for you.

For those who studied early childhood administration, the most popular fields that your degree might be useful in are education, health, and social work. There are also two main pathways to become licensed as an early childhood educator or administrator in Alabama - enrolling in a state-verified program for education administration or through the Alabama Teacher Reciprocity agreements.

With the first avenue being the most common, there are certain guidelines set by the Office of School Readiness (OSR), which is under the state’s Department of Early Childhood Education. The general terms include:

With the passion as well as the proper training/certification and degree in ECA, you may find yourself in one of the field’s popular career positions below. Note that these are just job descriptions of each title, not a complete guide.

Ready to take on the educational world and change the lives of hundreds of young children? Start your journey today into helping improve children’s life quality to impact the outcomes of early access to education.