Best Online Colleges in Louisiana
for 2023

Are you thinking about enrolling in an online college degree program in Louisiana? There are numerous colleges and universities in the state that offer distance learning opportunities. Students tend to have many options, with programs available at the associate, bachelor’s, and master’s levels. Depending on the subject area, it’s also possible for you to find online doctorate programs. While less common, this gives prospective students even more choices when pursuing higher education.

There are many reasons to consider earning an online degree in Louisiana. While specific employment opportunities will vary based on the subject area and level of higher education achieved, graduates typically qualify for more jobs than those who lack degrees. This tends to make finding work easier, as most employers set minimum education requirements for potential candidates. Those with college degrees are also considered to be better qualified and capable, making them more competitive when compared to others in the job market. Other benefits include higher salary potential and more employment security. Additionally, graduates also tend to feel a sense of personal fulfillment and accomplishment after earning their degrees. 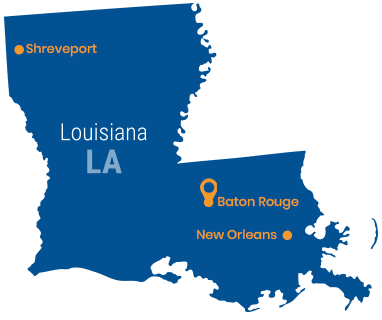 Those who graduate with online degrees in Louisiana can expect to have more employment opportunities. As of January 2022, the state’s civilian labor force is 2,069,200. Of those, 1,979,300 were employed at that time. This leaves 89,800 of employable individuals without jobs, making the unemployment rate for the state 4.3%. This is down significantly from the year before when unemployment was 6.5%. In fact, Kansas has seen a consistent decline in unemployment rates since hitting a record high in May 2020 and is currently at one of the state’s lowest points in the past 10 years.

As of May 2020, Kansas had a mean hourly wage of $23.34 and an annual mean wage of $46,460. The national annual wage is $56,310, making earnings for workers in the state below average. It’s worth noting, however, that college graduates will have better job prospects, as well as higher salary potential, than those who do not have college degrees. The level of education achieved is also significant. The average five-year postgraduate pay for those with bachelor’s degrees is $54,785 per year, while those with master’s degrees earn an average of $63,740 per year. Professionals with doctorate degrees have the potential to make even more, with average five-year postgraduate pay ranging between $74,846 and $86,570.

Prospective students should keep in mind that some industries pay more than others. In Louisiana, post-secondary employment wages are highest for the following subject areas: computer and information sciences and support, engineering, architecture and related services, and other engineering-related technologies.

As of the 2020-2021 academic year, the total student population in Louisiana was 253,786. This includes 213,902 undergraduate and 39,884 graduate school students. Of these, 68,249 students were enrolled online exclusively, while an additional 101,762 students were enrolled in some online courses. This means that over 66% of undergraduate and graduate students in Louisiana took at least one online class during the 2020-2021 academic year.

For Louisiana residents, the average cost of tuition and fees in the state was $8,267 per academic year in 2021. Students from other states paid more, however, with an average yearly tuition and fee commitment of $15,595. In-state students also paid less to live on campus as the average cost of housing provided by colleges and universities was $24,677. Non-residents paid an average of $32,005. The average cost of books and supplies was $1,617 for both groups. Notably, average in-state tuition rates have raised about $2,000 in the last two years.

Deciding to enroll with online colleges and universities in Louisiana may help decrease higher education expenses. Some institutions charge less in tuition and fees for distance learning programs. Additionally, online students do not have to pay for housing, meal plans, parking passes, or student activities fees. Those interested in attending classes online should also complete and submit FAFSAs, as they are still entitled to financial aid.

Prospective students can use college and university rankings to help them decide which academic programs are best. The information provided often makes it easier to fine institutions and degrees that suit their personal and professional goals best.

Out team uses a proprietary ratings system to rank schools offering the best online college programs in Louisiana. This helps us ensure accuracy and applicability for every type of student.

Some of the data types utilized to generate our rankings include:

We also focused our data collection process solely on properly accredited colleges and universities in Louisiana that offer credible online courses. Our investigation and assessment processes are extremely thorough as we develop the list of top online programs available in the state. Additionally, our team carefully considers the overall the quality and affordability of each institution in order to help students make the best decisions possible.

What are the Best Online Community College & Associate Programs in Louisiana? 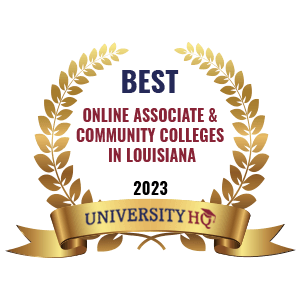 Prospective students can find many community colleges that offer online associate degrees. With numerous subject areas available, flexible class schedules, and affordable rates, these institutions are a viable solution for many. As many schools charge in-state students less in tuition and fees, this is a particularly good option for Louisiana residents.

Graduates from online community college programs typically have two options: they can either begin to apply for entry-level employment in their fields or enroll in further education. Many traditional institutions will accept up to 60 or 90 transfer credits from appropriately accredited schools. Associate degrees generally equate to two full years of four-year bachelor’s degrees.

Some of the best online community college programs in Kansas include those included in this list.

What are the Best Online Universities & College Programs in Louisiana? 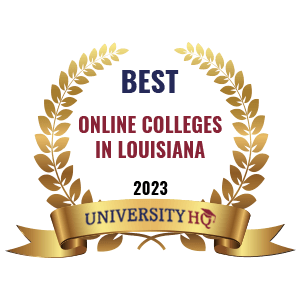 Louisiana is home to many colleges and universities that offer online degree programs. Degree types very by institution and area of study, but prospective students can expect to find options at the associate, bachelor’s, master’s, even doctorate levels. With flexible scheduling and affordable prices, students can obtain the knowledge, skills, and training they need to reach their personal, academic, and career goals.

Online college programs may be particularly appropriate for non-traditional students in Louisiana. This includes current professionals and individuals with other responsibilities that prohibit them from attending classing on-campus.

Some of the best online college programs in Louisiana include those on this list.