Your Guide to a District of Columbia MBA Career, Curriculum and Education

What Can You Do With an MBA in District of Columbia

Whether you are just starting out, or are a mid-career professional seeking advancement to a higher level, Washington DC has the right college, university, or business schools in the non-profit, private, or public sector that will help prepare you for a brighter future.

You can choose from a full-time MBA, part-time MBA, or various classes (online, on-campus, or a little of both) and have the flexibility to get your Master of Business Administration (MBA) in as little as fifteen months. An MBA program helps prepare you for an esteemed career in business, non-profit, or government associations while enhancing your critical thinking capacity and developing your ability to lead a team and business to success. Your ongoing education can also help you get a higher-ranking position, such as an executive manager or CEO.

Having an MBA can provide you with the power of leadership in various business fields with expansive earning potential and an opportunity to enhance your knowledge and go even further. Moreover, you will have a world of opportunity right in your own backyard, with access to renowned non-profits, multi-national organizations, and prominent government agencies in the Washington DC area. Or, if you want to attend one of these prestigious schools from elsewhere in the country, there are virtual, weekend, and evening class options providing accessibility for working professionals and current students alike. 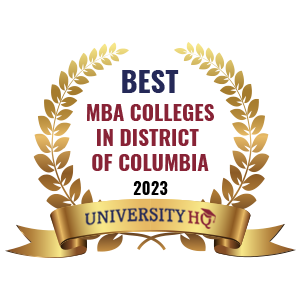 The city of Washington, D.C. — our nation’s capital — is full of opportunity and continues to grow at a rapid pace. It’s no wonder that the District of Columbia is known for its quality education and is found to be very appealing to college students every year. Not only is this community home to over twenty public and private colleges and universities, but it also offers some of the oldest schools in the country, including Georgetown University, which was founded in 1789 and is the oldest institution for higher education in D.C. and the oldest Catholic university in the US.

Despite the high cost of living, one of the things that makes Washington, DC a great source for education is that they offer a wide array of options to earn your MBA, whether you are interested in learning through services provided online or you prefer to meet with faculty and classmates face-to-face. Either way, you will find the same content, support, and ability to network, even if you skip campus life and apply for a distance learning program.

Many students search for online MBA programs because they are typically more flexible, so you can still work full-time while taking classes in your spare time. In addition, online courses may end up being less expensive than programs that center around on-campus academics since you won’t have to pay for transportation, textbooks, room and board, or other traditional expenses, and you can earn your MBA in anywhere from 15 months to 3 years depending on the college or university you select.

Students can concentrate in certain areas of business by taking specialized classes along with their regular MBA courses. Alumni from these courses are more easily able to enter positions as leaders or high-level partners within the business world because of the focused experiential learning they gain. There are many different concentrations to choose from. The following are just a few of the many concentrations available.

Accreditation in the District of Columbia

State accreditation in the District of Columbia assures the public that the State Superintendent of Education (OSSE), has examined schools, programs, teachers, and staff for quality and determined that state standards have been met. Hence, the goal of OSSE’s approval system and accreditation in the District of Columbia is to ensure that all teachers, service providers, and administrative staff are of high standards and excellent quality in utilizing numerous routes in education preparation.

Other accreditation agencies you may need to be familiar with are the Middle States Commission on Higher Education (MSCHE) and the Association to Advance Collegiate Schools of Business (AACSB). Schools request this accreditation and then must meet the terms and requirements to be provided it.

Washington, D.C. is best known for all things political. It is a city with a population of 4.8 million people and an average household income of $93,200, where 48% of its residents hold a college degree.

The District of Columbia s home to many establishments and major corporations, including 1,000 internationally-owned businesses, 400 international organizations, and over 100 academic institutions that operate degree programs that attract and educate students from all over. Of the rankings of all the metropolitan areas in the U.S., Washington DC has the highest college graduate percentage.

The region is also home to fifteen Fortune 500 companies that represent multiple financial corporations like Fannie Mae, the World Bank, and Capitol One; internationally renowned hospitality industries such as Marriott and Hilton; technology associations that include Blackboard, CoStar, and The Advisory Board; as well as Lockheed Martin, Computer Sciences Corporation, and General Dynamics engineering giants.

Washington, DC is considered a hub for global policy-makers, thought leadership, and critical international conversations about global politics, economy, peace, and the environment. The great city of Washington, DC is the headquarters for 176 foreign embassies, as well as all three of the US federal branches of government. In fact, the largest organization that hires the most employees in the region is the federal government, with the public-school system trailing right behind and coming in at number two. Thus, there are other large corporations in the area who also hire numerous employees to work at their offices in the District of Columbia, such as the Pan American Health Organization (PAHO), the International Monetary Fund (IMF), and the World Bank, just to name a few in addition to the following.

Getting your MBA in the District of Columbia is a very good choice, since Washington not only cares about its educational programs but also about the teachers and school staff involved with their school systems. Still, there are a few things you should be aware of before choosing just any college or university to attend.