How to Become an Accountant or CPA in Massachusetts

Business accounting is the process of recording financial transactions. In accounting, transactions are summarized, analyzed, and reported to regulatory agencies, tax collection agencies, and oversight agencies. A company's financial statements present a summary of its operations, financial position, and cash flow during a period of time.

The Bureau of Labor Statistics estimates that nationwide demand for the accounting profession will grow by 7% between the 2020 and 2030 reporting period, which, today, is faster than the national average for all professions and areas of employment. The rate of growth is slightly lower in Massachusetts where it's projected to climb by 3.9% between 2020 and 2030. By that time there will be 48,240 general accountants employed at firms throughout the state, earning a median salary above the 2020 estimate of $88,830. These professionals provide cost accounting, auditing, financial reporting, management accounting, and leadership for each private or public firm as well as national and state accounting organizations. They also are essential for providing general accounting experience and other related work experience to CPA candidates. This guide shows you exactly how to become a certified public accountant and CPA requirements in Massachusetts. 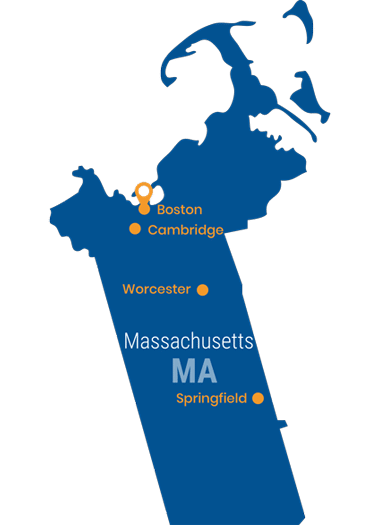 The Massachusetts State Board of Public Accounting is the governing body that creates policy for, awards, and monitors CPA licenses in the state. Anyone who wants to become certified must complete the Massachusetts CPA license requirements to earn and maintain one of these licenses. You can find the full process and additional help for free on their website but the first step is typically to complete the educational requirements. You may choose to start with an Associate in Accounting degree before moving on to an undergraduate degree, which will answer any questions you have about the profession. If you're still interested or you already know for sure what you want to do, you can skip the associate and go straight to obtaining a bachelor's degree at an accredited university with acceptable courses and an educational program that will give you the accountancy experience you need. The state board of accountancy might provide a list of specific academic programs with acceptable coursework.

Online Associate Degree in Accounting (AS)

A two-year accounting degree from a community college, or other institution, is a great, low-cost way to launch a career in accounting while simultaneously completing the core curriculum necessary for a bachelor’s degree.

With a bachelor’s degree in accounting, students can sit for the CPA exam. An undergraduate degree is also the best choice for entering the job market.

A graduate degree in accounting is a perfect way to prepare for the CPA examination, and is a practical necessity for those seeking a desk in the c-suites.

Though the business community doesn't require a doctoral degree, they are sure to value such rarefied academic credentials. This degree is perfect for those seeking a career in academia.

Online accounting degree programs offer credentials at all levels and professionals benefit from their flexibility, as well as their outstanding outcomes.

Every CPA in the country is required to take the Uniform CPA exam, a standardized test covering the concepts and competencies most important to a CPA. It is not necessary to have completed the entire education requirement to sign up for the exam. Applicants must have completed at least 120 of the required 150 semester hours with at least 21 hours in accounting and 9 hours in business. They must also plan to finish their higher education soon after they sit for and pass all four sections of the exam, or they will not be able to practice at any private or public firm for their practical experience and they may have to retake one or more of the tests.

Once that threshold is met, follow these steps to prepare for the exam:

In order to keep CPA skills fresh and current the Massachusetts Board of Public Accountants requires anyone with a license to complete mandatory continuing professional education (CPE) as a condition of renewal.

They must meet the requirements of the continuing education committee:

Become an Accountant in Massachusetts

One you have earned the necessary education and passed the required exam, you are eligible to begin working as an accountant in Massachusetts in order to earn practical experience. However, you are not a licensed as a CPA.

That is only possible after you gain the required amount of experience to get approved for your CPA licensure application:

Getting Your CPA License in Massachusetts

It is illegal to work as a CPA in Massachusetts without a valid license. As long as you have competed all of the requirements outlined above, you should have no problem getting approved for a license.

There are several options available:

Massachusetts is one of the best states in the country for accountants, for multiple reasons. The Bay State is among the top employers of accountants and auditors, with more jobs being added every year. By the year 2024, the number accounting jobs in Massachusetts is projected to rise by nearly eight percent, adding a total of about 3,070 employment opportunities overall. Though accountants all throughout Massachusetts earn some of the highest salaries in the industry, those working in the Boston area come out on top with an average salary of $56,300. Average incomes remain consistently high for accountants in the rest of the state, with mean annual salaries starting at $65,360 and climbing.

How much do accountants make in Massachusetts?

What are the educational requirements to sit for the CPA examination in Massachusetts?

To sit for the CPA examination in Massachusetts, students must have completed 120 semester hours culminating in a bachelor's degree. Of those hours, 21 semester hours must have been in accounting. Specifically, the Massachusetts Board of Accountancy requires coursework in financial accounting, audit, management accounting, and taxation. The Board also requires other business courses in information systems, finance, and business law.

How many accounting jobs are there in Massachusetts?

There are nearly 35,000 accountants currently working in Massachusetts. Nearly 30,000 of those are in the Boston area, which includes Cambridge and Nashua, NH. There are a few more bookkeepers in that area, about 33,000. Thus, new graduates will be well-served by seeking an entry-level position in or near to Boston.

Can I get an online accounting degree in Massachusetts?

Yes. In fact, UMass at Dartmouth offers AACSB-accredited online bachelor’s and master’s degrees in Accounting. Students can complete their entire degree online or use the medium as their schedule requires. UMass Amherst also supports AACSB-accredited online accounting programs for both graduate and undergraduate students. Additionally, there are many more programs both in Massachusetts and throughout the nation that confer degrees via online media.