Best Online Colleges in Nebraska
for 2023

Nebraska is a large, though sparsely populated, Midwestern state. Its economy is dominated by industries such as manufacturing, finance and insurance, real estate, professional services, and social services such as education, healthcare, and social assistance. While it may be thought of as an agricultural state, that industry comes in 9th for Nebraska's top industries. The employment data reflects slightly different numbers, since some industries require more workers. For instance, government leads the pack for the most employees in Nebraska, with business services not far behind.

To ensure that these sectors remain healthy and growing, Nebraska relies on its colleges and universities to feed the economy with skilled, capable workers. To that end, the state's higher education institutions strive to focus on the issues that matter most to the Nebraska economy. Business departments strive to hire faculty that not only have top academic credentials but also those who have had experience in the Nebraskan economy. 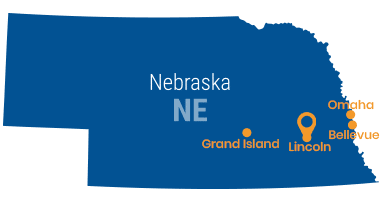 An education in Nebraska is rather affordable, especially for those who attend one of the state funded colleges or universities. In fact, the average cost of tuition and fees for a Nebraska college or university is a mere $5,000 for state residents. Non-residents in Nebraska pay a bit more but their fees only amount to around $16,000, on average. When all costs are considered, the average cost to attend college in Nebraska is just over $30,000, with on-campus living costing a bit less than off-campus. To keep costs down, Nebraska students should consider spending their first two undergraduate years in a community college.

Many Nebraskan students are also opting to cut costs and add flexibility to their college experience by attending online college degree programs. The state is currently home to 34 total colleges and universities that offer online degree programs. The number is split nearly evenly between public and private institutions, but 18 total public institutions offer online education, and 16 private schools provide this distance learning alternative.

Online learners are able to complete a college degree and enjoy the same outcomes as their traditional, on-campus peers. The distance education model also allows them to maintain a job and not have to move away from their hometown in order to work on a degree. This distance learning option is especially terrific for those who start with an associate degree. They can complete the two-year degree and then move to a four-year university if they choose for their full bachelor’s degree. However, Nebraska's colleges and universities offer online bachelor’s degrees, too. In fact, nearly 1/3 of Nebraskan college students attend college degree programs exclusively online. Less than half eschew online education altogether.

When we rank Nebraska's online colleges and universities, we evaluate several criteria. We strive to use the most objective data available so that students have an unbiased source. They can then balance their more subjective feelings and desires against ours and arrive at a balanced decision for their academic careers.

To arrive at our rankings, we seek several data points. Among those are whether the school offers online degree options, the retention rate, graduation rate, student to faculty ratio, salary outcomes, and the school's overall reputation. The retention rate is an important figure that reflects how highly students value the school's overall educational value. Another key data point is the graduation rate, which is naturally a percent of students who receive a diploma from a school. This number is augmented by the transfer rate, which may also indicate student success, if at another school.

What are the Best Online Associate & Community College Programs in Nebraska? 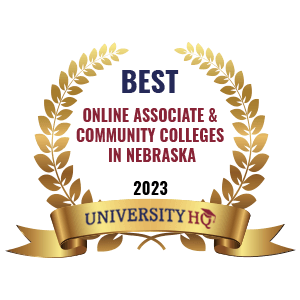 Nebraska college students should consider an online associate degree, especially if their desired degree is not offered in their local community college. They can thus complete their associate degree without having to move across the state. Once they graduate, they can proceed to a four-year college with or without moving. Thus, they only need to move one time, if at all. After all, 34 of Nebraska's colleges and universities offer online degree programs.

What are the Best Online Universities & College Programs in Nebraska? 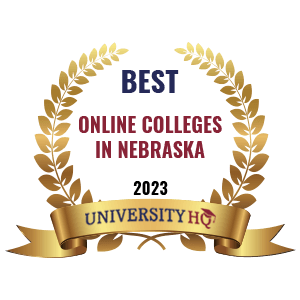 The best online college degree programs in Nebraska are those that are able to retain their students from the first year clear through to graduation. They must also be fully accredited, have a strong reputation, and a low student to faculty ratio. To choose an online college degree program, students should ensure that the program offers exactly the degree they need to succeed. Associate degree students may have more latitude in this area, but it's still important to complete a complimentary online associate degree program. Students should also consider our best online college rankings for their Nebraska education.