Your Guide to a New Mexico MBA Career, Curriculum and Education

What Can You Do With an MBA in New Mexico

New Mexico has a population of about two million residents. More than one-quarter of the population resides in Albuquerque. New Mexico is a geographically large state with a concentrated population, which may enhance or limit the accessibility of undergraduate and graduate programs depending on where you live if you have to attend offered classes in person. The state economy is in the midst of an economic surge that proceeds from greater federal government interaction, scientific research, increased healthcare and medical services, and new waves of business growth. Education also plays a significant role in the state economy. The University of New Mexico is the state’s largest employer, and their educational programs have enriched the entire population. And an increase in distance learning studies, designed to provide learning to any student who can access a website, has advanced the cause of education in New Mexico. This type of learning has broad appeal and has usefulness for the state’s remote communities in general as well as those who are professional office workers and others who can’t afford to leave their jobs or families for a year or more to complete a degree program. The opportunities in an expanding business economy favor those with MBA degrees. 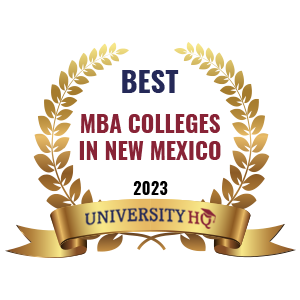 The University of New Mexico, New Mexico State University, and three other top schools offer online education in the state. In-state resident students can have the benefits of class flexibility and minimal interference with work, family, and business obligations. Some courses include requirments for everyone to meet at the same place and time for events a couple of time a year to meet faculty, staff, and classmates, or at least log into the school’s system on a schedule. This group approach is called synchronous learning. The asynchronous style does not use the group method. Instead students can access classroom work online anytime and from anywhere through a computer in order to master the material, meaning they can skip class on especially long days and work over the weekend instead. The time periods for graduation vary from a minimum of 18 months to a maximum of three years for completion of the degree. Self-paced learning offers freedom and flexibility that is particularly helpful for business owners, working students, and students with dependents who are looking to gain admission and build their skills without losing balance in their work, family, or social lives.

A concentration takes your MBA past the basic foundation of core courses in business and into a deeper understanding that you can shape to help you meet your future goals. You’ll still take the main courses associated with an MBA, but you will also gain specialized knowledge in the concentration of your choice. Some options include international business, operations management, law and legal studies, strategic planning, and more

Making sure your program is accredited is vitally important. Not only will it allow you to transfer any credit hours you earn to another institution, but there are also policies in place that keep students in non-accredited programs from accessing federal student aid or funding for their degree programs. Also, if you do not earn your degree from a program with accreditation, possible employers will not look on your degree favorably.

Top Employers in the State by Number of Employees

When considering an online MBA in New Mexico, the best place to start may not be the course catalogs. For many students, the best place to begin the search is to quietly and calmly identify the goals they wish to advance by getting an MBA. The goals could be a new profession or career advancement in an existing line of work. Many people use an MBA to start a business. Your goals can help you decide which program is best. You can align goals and program features to make a New Mexico MBA program selection that meets your needs and preferences.